In Honor of the McGowan Brothers 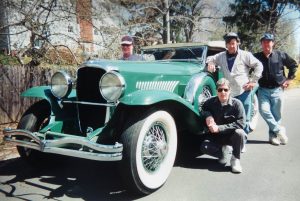 The four McGowan brothers (Frank, Bob, Dennis, and Jack) were closer than many siblings. Frank, Bob, and Dennis are well known in the world of vintage automobiles for their Branford, CT–based auto restoration business, C. Farquahr Company, but they did not start out in the automotive industry. In the 1960’s they comprised an Irish-folk musical group, the Fabulous Farquahrs, performing along the east coast to a cult following and even traveling with Hubert Humphrey’s presidential campaign in 1968. It wasn’t until the 1960’s ended and folk music lost its momentum that the McGowans turned their longtime interest in classic cars into a business. The brothers restored hundreds of automobiles as the proprietors of the C. Farquahr Company, each one carefully selected and then restored to its original state.

John (Jack) McGowan, though not involved in his brothers’ music or car business, was nonetheless an integral part of their lives, vacationing with them at Hershey and keeping an eye on things so they were free to venture out and take care of business.

The McGowan brothers were honored at the 2016 Klingberg Vintage Motorcar Festival by their longtime friend Richie Clyne.